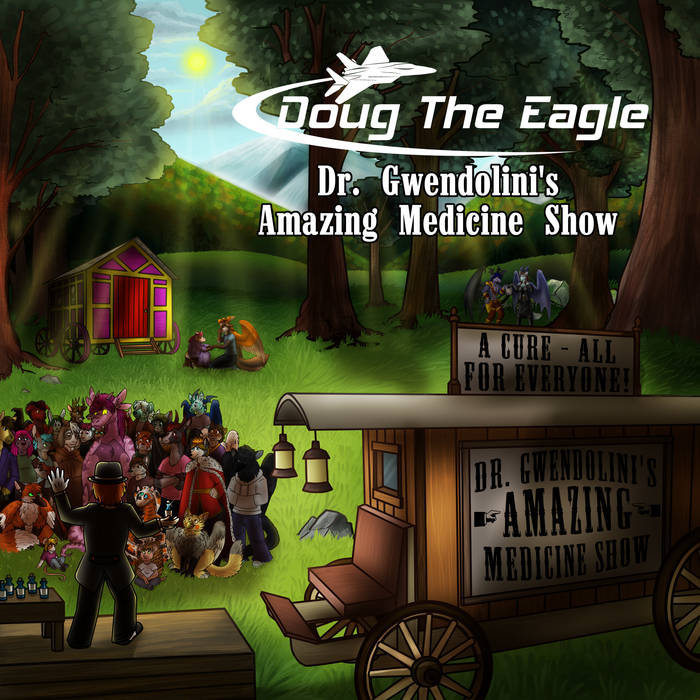 Sven B. Schreiber Don't be fooled by the odd first 50 seconds - the album gets much better after that! This one-man band impersonated by Joseph Paul Morris creates clever psychedelic prog with a funny touch, sometimes sounding a bit like the early ingenious "Klaatu" recordings. Joseph Paul Morris owns an impressive collection of vintage gear, including a weird device called the "Tornado Mellotron Engine" - a mellotron emulator hosted on a DOS PC, for which he wrote the software himself. Oh boy, I'd just love to peek into the source code of this beast! Favorite track: King Ordros.

This is my fourteenth (!) album, following in the wake of 'Evil Songs for Evil
People' and 'The Heresiarch's Breakfast', with few changes to the studio systems since then. I have been experimenting with new styles, however. The title track featuring the sounds of the Optigan, a bizarre home organ that used celluloid discs to play back scratchy, lo-fi sounds and accompaniments. On 'Saludora', experiments with time signatures resulted in a bassline so far beyond my skill that I resorted to tape speed trickery and overdubbing to make it work. While on 'Dictator', a minimalist approach is taken which attempts to fuse punk and psych into an angry rant about the state of the world. The album is topped off with the usual extended piece.

Greetings go out to Keaton, Ren, Wuff, Keetah, Sofox, Merlin and co.
Thanks go out to the Rosegarden team, to Brian Roth and all at Pyral, ATR, MRL and co for keeping the analogue dream alive, also Pea Hicks at optigan.com
Cover by Keetah Spacecat, logo by Luke Turner. Organ recorded at St. Grod’s. Recorded on SM900 tape, mixed to ATR Mastering tape.

We interrupt this program for a very special thing...
Dr. Gwendolini’s here and he is gonna sing!
Dr. Gwendolini:
Welcome one and welcome all and just forget your woe!
It’s Dr. Gwendolini’s Amazing Medicine Show!
Selling patent miracles and snake oil in a jar...
It’s not true I’m a wanted man, that would be bizarre!
Here we have a little pill to save you from your fate
Side effects include REST IN PEACE and a sudden loss of weight
That’s all we have time for, but don’t forget to go
To Doctor Gwendolini’s Amazing Medicine Show!

The Don:
Upon her sickbed my grandmother lay
I got the news that she had died today
He said he’d cure her sickness, but that was just a lie...
Now Doctor Gwendolini... must die.

The Don:
With Doctor Gwendolini, I want the job done neat
Into the river, with weights around his feet!

The Don:
...and on the Third Day
She had arisen!
She rose from the very grave itself...
Fifty years younger and in perfect health
What dark miracle has Doctor Gwendolini wrought?!

I was walking down a country lane, a gypsy called to me
She said “I’ll tell you ‘bout the future, son, for a silver coin or three”
I said “I don’t believe you have the skill to peel the future’s veil away”
She said “The truth is in the numbers, son, so hear what I have got to say”

7 deadly sins,6 geese a-laying, 5 gold rings, 4 horsemen slaying
2 crows for joy, 1 crow for sorrow, nought is the hour today becomes tomorrow
All these things I see, but I don’t believe in numerology

“You will meet a stranger tall and dark, as strange as strange can be
And he will teach you all you need to know about the mystic number three”
I said “Oh, go and pull the other one, that line’s as ancient as can be”
She said “You will not have a future, son, unless you hearken now to me”

That night I met a stranger tall and dark, exactly as she said
I think the thing that gave me pause the most were the grey wings on his head
He said “I’m glad to see you’re still alive, for there’s a bounty on your head
For you’re a member of the ‘Cubi race and many people want us dead!”


Chorus
I let the stranger take me far away, and he told me many things
I’d often wondered where my parents went and why I have these feathery wings
At first I wondered if it was a prank, but then it all made sense to me
The only thing I never understood was why I hate the number three

Do you remember when we met...?
Your lips a gorgeous shade,
As crimson as the blood upon the blade

Do you remember how we met...?
Your smile was cruel and thin
Until the entertainment did begin

Do you remember where we met...?
The turned the rusting lock
And led the slaves down to the chopping block

Your executioner is dead
My dear, I’ve saved your life would you accept my hand and be my wife?

My dear, you’re evil as can be
I’m pretty evil too, I’d like to have an evil child with you
Track Name: Dictator (shut up and take it)
Dictator

In the land that they call Saludora, evil things occurred
And the rulers were replaced with ones the common folk preferred
In the land that they call Saludora, no more tyrants reign
And we changed the constitution so it won’t happen again
Well they just ignored our pleas, so they got strung up from trees
And they only found the justice of the grave
Track Name: King Ordros
King Ordros (From the Chronicles of Jakob Pettersohn)

“Oh no,” said he, “You must love me
And obey me without a frown
Unless you do, I shall execute you
For insulting the kingdom’s crown”

There was a king, he was a tyrant
He acted like an overlord
He used to have opponents, but he put them all to the sword

A pair of men, two swords for hire
Were blackmailed into robbing the king
Regain the stolen treasures he had taken under his wing

When they were caught, they struck a bargain
The Princess had been stolen away
Unless they could return her, they would lose their heads right away

There was a land, owned by a dragon
The place the princess had been seen last
The headsman tagged along to make sure both men stuck to their task

Deep in the forest where none would hear
The headsman made his position clear
“I know you won’t trust me,
but I hate the king and he must be stopped!”

They knocked the door, which was tall and stout
The dragon answered and threw them out
“We’ll have to try trickery instead, then”

Once past the walls they scoured the halls
For some hair or a scrap of dress
They found that day, to their dismay
That the dragon was the princess.

So she explained, why she’d absconded
The Queen had been beheaded for treason
The Princess fled in case she faced the same end for the same reason

They had a coup, led by the Princess
The headsman did away with the King
It turned out he could shapeshift and so no-one noticed a thing

So this was the story of Ordros the King,
A story of dragons and dreams
A story of treason and righting of wrongs
Where nothing is quite how it seems

Tasty gems from around the world, plus interviews with Kaitlyn Aurelia Smith and Nick Hakim.